We left Queenstown around 10ish Tuesday morning heading northwest for Lake Tekapo. Our road led us right past Kawarau Bridge. How fortuitous! A.J. Hackett – Kiwi, adrenaline junkie, and inventor of bungee jumping (he must be filthy rich now) – opened the world's first commercial bungee site there in 1988. How could we not stop to check it out? The site is impressive. They've built an $8 million bungee site beside the bridge, with a tourist shop, a pricey cafÃ©, and three fantastic viewing platforms. We watched several brave souls take the plunge. It's hilarious to see! There were people from all over the world, at every age, both male and female jumping. According to a fact board inside the bungee site the youngest jumper was 10 and the oldest was in his 90's!!! We hung around for a couple of hours just enjoying the spectacle. Finally Greg worked up the nerve to try it himself. I stood on one of the viewing platforms, camera at the ready. They built the jumping platform at the middle of the bridge. Two guys tie the bungee to the jumper's ankles. It doesn't take long for them to set it all up. Greg was hopping to the edge in no time. Clever lad, he threw himself off the ledge without allowing himself a moment of hesitation. Down he fell and then ˜whoosh!' the elastic snapped him back up. I couldn't help but giggle at Greg swinging and bouncing around the river canyon, arms flailing. Wait till you see the video. Bungee jumping is just so silly. When he stopped bouncing about, two guys in a raft on the river caught him, pulled him into the boat and unbuckled the bungee. The whole experience took less than 5 minutes. Greg says it was worth it, though. Part of me regrets not trying it myself. (*Greg: As I sat getting my ankles bound, I neglected to realize that I was about to hurl myself off of a bridge. Seconds later I found myself at the edge of a small platform. Forty-three metres below me was the water. Scattered throughout my stomach were butterflies telling me that I was insane. Upon being counted down, I gallantly jumped without hesitation. Instantly I swore. For the entire fall one can't feel the bungee cord, and as a result I felt as though I had actually just jumped to my death. Soon after jumping the cord snapped and I enjoyed a rather amusing bounce around the canyon before being lowered into the boat below. The worst part of the whole affair was the long, winding, uphill walk back to the bungee centre. Holly took some excellent video, and I've a DVD of the incident. Hopefully we'll get both up soon. Edit: The DVD clip I have of the jump is down below. You’ll have to wait on Holly’s lovely footage.)

It took us the rest of the afternoon to drive to Lake Tekapo. It was mostly very bare, empty, scrubby brown hill country along the way. We discussed the many interesting facets of bungee jumping. We ate peanuts. We played alphabet games. We took a 2 hour detour up to see Mount Cook. It was funny to think that a few days earlier we were gazing up at the same mountain from the other side, standing on the shore of Lake Matheson. There isn't much in the way of towns in the Mount Cook area. There is an enormous, extravagant resort hotel, The Hermitage, at the end of the highway leading to Mount Cook. It reminded us of The Shining's Overlook Hotel. It is very beautiful up there, but also a bit eerie with the quiet mountains looming all around.

Our road took us alongside Lake Pukaki, a startling turquoise as a result of the sediment suspended in the water. We were forced to stop for a few minutes while a flock of sheep crossed the road herded by several imperious sheepdogs and a shepherd on a 4-wheeler. You can laugh, but it was one of the highlights of the trip for me. To be stopped on a highway in New Zealand by a mob of sheep “ it doesn't get any better than that!

We made it to the small town of Lake Tekapo late in the afternoon. We bought a bottle of wine and found our hostel, ˜Lakefront Backpackers'. It was a pretty spot, right on the lake's edge. The hostel had a main building with an office and dorm rooms, as well as a few share-cottages along the road. We stayed in one of the cottages with three other couples. Our cottage had 4 bedrooms, one bathroom, a fully equipped kitchen, a small dining area, and a comfortable living room. The other couples were all very friendly. There were the older South Africans, the couple from Singapore, and the couple from Sweden. We chatted with them while we cooked dinner and drank our wine. Greg and the Swedes bantered back and forth about hockey & whose country had better players. I talked with the South Africans for awhile about their home country and their immigration to NZ. It was a cozy, fun evening. (*Greg: I made the mistake of citing Canada's hockey superiority, forgetting that the Swedes would have something to say about their own claim to the throne. A debate was had, and I believe I may have convinced them of my original statement. I told them of the holy status hockey held in Canada, and how it easily overshadowed all other sports and quite often many aspects of day-to-day life. Following that, someone had turned on the television only to receive word of the shooting at Virginia Tech in the States. Naturally as one might expect, this resulted in a Swede and a Canadian debating, discussing, and dissecting American values, problems, and foreign policy.)

Greg and I walked down to the beach before bed. There are no cities in the area to cause light pollution. It was a clear, crisp night. The stars were absolutely brilliant over the lake. I felt like I could float right up into them! So intent was I on the cosmos that I stumbled right off the edge of the road and tumbled spectacularly into the rocky ditch below, scraping my knees painfully in the process. Greg says alcohol may have been a factor in the accident. Maybe he's right – but I'd rather believe that I was drunk on the beauty of the night, and our fabulous trip, and glorious life rather than cheap wine from Oz. We may never know the truth of the matter. In any case, sleep hit me like lightning that night. (*Greg: Alcohol may have been a factor? I submit as my only piece of evidence the following statement that was made but a few sentences ago: œI felt like I could float right up into them!, case closed. Great wine though!) 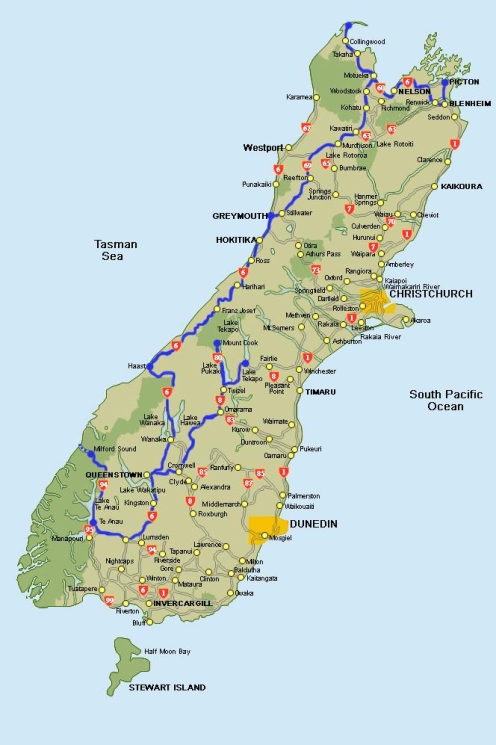