We left the West Coast behind early in the morning and headed east into the mountains over Haast Pass. I had imagined that the road would be treacherous, twisted, steep,maybe even snowy. It was actually very tame. Much straighter than many of the roads we'd travelled thus far. We stopped along the way to check out Thunder Creek and Fantail Falls, recommended by Lonely Planet. The water of the falls and of Haast River is cold, cold, cold, and so pure. Greg felt tempted to swim. Brrrrr! (*Greg: I did take the opportunity to submerge my sandal-clad feel in the clear, crisp, water. This I did not regret. Swimming, however, I'm sure I would have.)

About an hour or two north of Queenstown the road curves around two massive, breathtaking freshwater alpine lakes: Lake Wanaka and Lake Hawea. The land and hills around is all tussocks and shrubs, every shade of yellow and gold. The mountains stretch out in great green folds. The sun on the water sparkles and dances. There are two small towns at the ends of the lakes but for the most part the area is pristine, natural, untouched by human development. Later that day we saw an article in a magazine in Queenstown about Shania Twain's new mountain hideaway around Lake Wanaka. The lucky dog! If I were a multimillionaire, I'd be building myself a home up there, too.

From the town of Wanaka we took the scenic Crown Range Road to Queenstown. It's a dangerous road to take depending on the weather and time of day; it's often closed to prevent mishaps. Happily, it was midday, sunny and clear when we went through. The highway winds through rounded, grassy, golden mountains broken here and there by islands of rock and tiny streams. I wouldn't have been all that surprised to see a company of Rohan horseman riding past. The road breaks out into the open quite suddenly, revealing Queenstown way down in a valley at the feet of the snow-capped Southern Alps. Driving down to the city below was a bit frightening “ talk about hairpin turns! Any disappointment I may have felt about the tameness of Haast Pass was made up for by the trip down to Queenstown. We stopped briefly in Queenstown to eat a picnic lunch beside a rugby field, entertained by a group of boys playing the game. Queenstown sits around the shore of Lake Wakatipu, surrounded by mountains. The wind blowing off the water and down from the tall peaks was frigid.

After lunch we continued our journey south, the lake stretching on for several kilometres on our right. We drove past œThe Remarkables, a truly, well , remarkable mountain chain, lined up together like kids for a class photo. I think Greg, driving, got a bit tired of hearing me gasping, wowing, oohing and awing over the sights. On our return trip to Queenstown a few days later I drove so that he could take it all in. (*Greg: At many times during the course of the trip, Holly would start grand conversations about sites that were currently whizzing by as we drove. Many times, she would be startled by my silence, and inquire as to why I wasn't remarking on many of the amazing views. Unfortunately, when driving it is best to keep ones eyes focused on the road. Especially in and around Queenstown where you are likely to be driving along the edge of a cliff, up or down the side of a mountain, winding around tight curves, or any combinations of the aforementioned. Thus, at times driving and preventing certain death took priority over some scenery. Holly realized this, and was thoughtful enough to make a point of driving when we passed through the same area when on our way to Queenstown.)

We left the mountains and drove through farmland before reaching our final destination for the day, Te Anau, a small, touristy, pricey town on the edge of Fiordland. ˜Barnyard Backpackers', the hostel we stayed at is 9 kms out of town perched on a hill above a deer farm. It's a very pretty spot with fantastic views of the mountains. The hostel has great personality. Our room was actually half of a little cabin a little ways down the hill. We had our own bathroom and shower “ oh, luxury!! From our room we could hear the deer groaning and bellowing down below, day and night. At first we had no idea what the noise was. It sounded like cows gone mad. Quite alarming, really. It began to sound oddly familiar to me, though. It finally hit me that it sounded a lot like Dad's moose call. Okay, so a moose isn't a deer, but their weird singing (if you can call it that) is similar enough for a connection to be made. I thought it was so strange to see big groups of domesticated deer wandering around fenced fields. Definitely not something you'd see back home. (*Greg: The deer sounds were most disturbing. My initial thoughts when hearing the odd groans was that we had somehow been transported to the Island of Dr. Moreau. The creepy nature of the noise was only heightened when heard in the middle of the night. Otherwise, an absolutely beautiful spot. Barnyard Backpackers had some simply breathtaking views, to be found right outside the front door of our cabin.)

Fiordland was shaped by glaciers in the distant past. The moving ice carved out deep fiords and created a range of towering, steep mountains along the island's southwest coast. The area is notoriously wet, one of the wettest spots on Earth; we were told that two and a half out of three days is rainy! The wet weather is a result of the constant westerly winds blowing warm, wet air off the Tasman Sea. The wind rises when it hits the mountains, cools, and drops an absurd amount of rain onto the land. Into this sodden realm we intended to travel the next day, following in countless tourists' footprints to see the legendary Milford Sound. 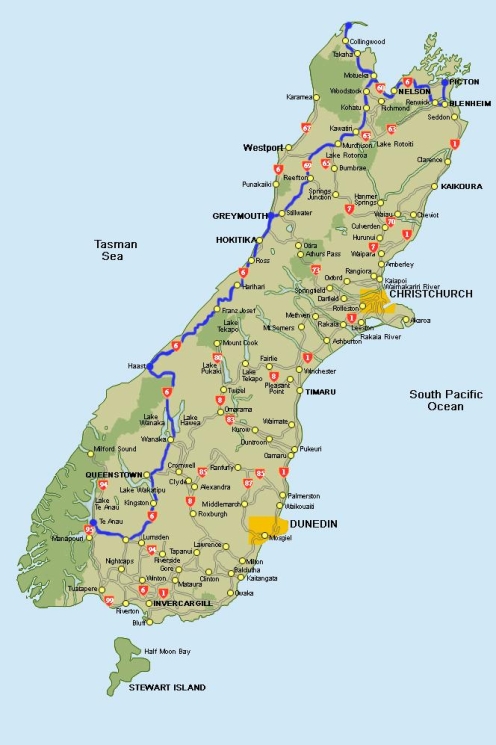