We didn't spend much time in Greymouth. We were up, packed, and checked out of Duke's around nine. Before leaving I called home to wish Mumma a Happy Birthday, it being the 12th of April in Canada. We stopped at the grocery store in town for a few items. The realization that I had left my wallet somewhere at the hostel hit me as we pulled into the car-park. I desperately fought down the panic rising in my throat as we raced back to Duke's. I found my poor little pink and brown wallet sitting forlornly on the bench in the front lobby where I'd carelessly dropped it while adjusting my luggage. Excellent start to the day, Hollis! Friday the thirteenth, indeed.

We left Greymouth traveling south down lovely highway 6 along the coast. The scenery was grand: the Tasman appearing now and then to our right and the Alps rising to our left. The highway winds through forested hills and mountains, passing through the occasional small town with a few farms dotted here and there.

We stopped around midday to check out the West Coast's two famous glaciers, ˜Franz Josef' and ˜Fox'. They're easily reached from the highway if you want a quick look at the terminal (the final ice face at the bottom of the glacier). For the more adventurous and more wealthy, there are a zillion other activities offered in the area. You can take aerial sightseeing flights above the glaciers in a plane or a helicopter, you can take independent walks beside the glaciers, you can take guided walks right on top of the glaciers, you can do a œheli-hike which combines flying and guided walking,.the list goes on. Greg and I were limited however, both in funds and time. We stopped briefly in the town of Franz Josef to check out the info centre's map of the area. We decided to skip Franz Josef Glacier, and took the short walk up to the terminal of Fox Glacier. The great ice sheet itself was,..far away and dirty, to be honest. It reminded me very much of the end of winter in the Sault – the islands of filthy snow and ice that are the last to slowly melt. The strange shades of blue in the deep cracks in the ice were beautiful, and the sheer size of the glacier was astonishing. I was impressed by the massive cliff walls carved out of the mountains by the glacier's movements over thousands of years. Looking up to the top made me dizzy. (*Greg: The glaciers were quite impressive. I'm sure I still don't have a great sense of the actual size of both Franz and Fox. There were streams, rivers, and little ponds all around the glacier areas. As expected, the water in these bodies was as beautifully clear -and I'm going to guess wildly that they were chillingly cold – as I'm sure is possible.)

We stopped for a quick walk and a picnic lunch at Lake Matheson, formed by the glaciers about 14,000 years ago and œfamous for its reflected views of Aoraki/Mount Cook and Mount Tasman “ NZ's two highest peaks (Thanks for the info, Wikipedia). Unfortunately when we were there the lake was rough and clouds were hiding the mountain peaks. A great variety of wildlife lives in and around the lake, including long finned eels. We actually got to see an eel swimming just under the surface by the shore. Very cool! (*Greg: Very cool indeed. I was probably too excited by the presence of the eel, and had to be gently prodded to vacate my eel-viewing to continue with our day.)

We continued down the coast, finally arriving in the small community of Haast late in the afternoon. Haast is a quiet, rugged, remote place. Our hostel, ˜Haast Wilderness Accommodation', was half motel, half backpackers. It has an average kitchen and mediocre bathrooms and showers. I'm pleased to say, however, that it is squeaky clean. Its best attribute is the inner court yard where there's plenty of room to hang out, read, play games, etc. It was here that Greg and I first played chess together. I lost miserably, and Greg discovered what a wretched, poor sport I can be. (*Greg: The courtyard was wonderful. Indoors with a skylight, it held many plants and even had a waterfall. Chess was fun. Holly had mentioned prior to our departure from Palmy that she would like to partake in a few games of chess. Unfortunately for Holly, she convinced herself at some point in our game that because she had lost more men than I, there was no possible way to win. The game ended fairly peacefully. However, chess would strike again later on.)

While in Haast we checked out the nearby beach. Greg wanted to watch the sunset on the West Coast. It was impossible! The wind was vicious, hurling sand and sea foam at us. The surf was thundering so loudly we could hardly hear each other speak. Our footprints disappeared within minutes beneath the ever-shifting sand. We sat in the dull, stuffy car for a bit, munching on stale peanuts, before admitting defeat. The West Coast certainly deserves its reputation for ruggedness. It is beautiful, though. 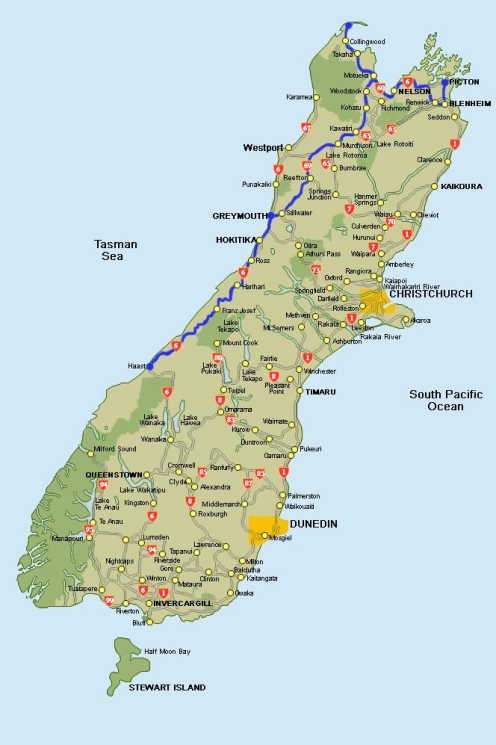