Wednesday morning was very chilly. We woke up and had breakfast with the South Africans (I feel terrible that we never learned their names!). We showered and packed, and were on the road to Kaikoura. We stopped on the way out of town at a small bakery for second breakfast. The drive northeast was long and rather dull, scenery-wise. Pretty countryside, farms, small towns, and forested areas here and there, but lacking the wild and vast magnificence that we had come to expect. It's a more settled area, close to Christchurch on the east coast. We looped around Christchurch, neither of us all that interested in passing through the busy city. They say that it's a lovely place, with much to see and do, but we were short on time and money. What's another city if you don't have money and the time in which to spend it?? So we bee-lined it to Kaikoura, playing all kinds of alphabet and ˜20 Question' games to pass the time “ the further along, the sillier the games became.

The drive grew more interesting about an hour before Kaikoura. We were approaching the city from the south, driving up the coast on Highway 1. We went up into yet more mountains and the road began to twist and curve again. It makes driving fun – the way you imagine it to be when you're a kid. Around a bend and down: suddenly we found ourselves driving beside the ocean. We were hugging the steep mountains to our left, with the rough South Pacific crashing in on our right. The mountains rise right up from the ocean along that stretch of coast. The railway winds alongside the highway; the two often duck into twin tunnels cut out of the mountains. The cold, overcast weather enhanced the lonely ruggedness of the landscape.

Kaikoura is a small city on the northeast coast. Steep foothills rise behind it and the endless ocean rolls at its feet. It began as a small fishing town but it has since grown into a haven for wildlife enthusiasts. Travelers flock there for a chance to spot whales on one of the many whale-watching excursions offered by local tour companies. Also to be seen are several varieties of dolphins, New Zealand fur seals, orcas, pilot whales, blue penguins, and a range of sea birds including petrels and albatrosses. Unlike most booming tourist towns I've traveled through, Kaikoura exudes personality. It hums with life and character; it doesn't have that tacky, false sheen of a typical tourist town. It's a shame that we didn't have more time to spend there! (*Greg: I loved Kaikoura. As Holly noted, it is very much an authentic town that one might expect to find on the coast. If you’re ever ‘in the area’, it’s recommended.)

We arrived late in the afternoon and found our hostel, ˜Dusky Lodge'. It was a very nice, big backpackers', with two clean kitchens, a huge deck out back, a swimming pool and hot tub, and a Thai restaurant attached. It felt more like a hotel than a hostel.

I had read in Lonely Planet about a roadside seafood BBQ stand that served, among other delectable ocean treats, NZ green-shelled mussels at an unbeatable price. Those of you who know me, know that I am especially fond of mussels. After we unpacked we headed back out in the car in search of œKaikoura Seafood BBQ. We found it just outside of town at the side of the road by the seashore. It was basically a small open-kitchen on wheels, similar to a chip wagon but more exposed to the elements. One woman ran the show. She stood behind the counter bundled up against the cold wind and rain, taking orders for chowder, barbequing mussels, and answering queries about the price of freshly caught crayfish (lobster!). Greg and I ordered a cup of chowder each and 12 barbequed mussels. We sipped our scalding hot soup and made small talk with the cook as she slathered garlic butter onto our mussels. They smelled unbelievable – I was drooling by the time they were ready. We took our paper plate of food and ate at one of the plastic picnic tables set up beside the BBQ stand. The wind was frigid, my fingers were icicles “ but nothing could take away from the taste of those mussels. I had hot, buttery, garlic dripping from my chin, my hands were sticky and my napkin had blown out to sea. I couldn't care less. I was in food heaven!! Before we knew it, they were gone. I think it was me who voiced the suggestion that we order more but it didn't take much urging for Greg to acquiesce. (*Greg: If ambrosia was the drink of the gods, the mussels we ate in Kaikoura must have been what they dined on. The mussels were giant, delicious, and reasonably priced. By far the best mussels I've ever eaten, and I would be very surprised if any others in my lifetime will lay claim to this title.) I probably would have ordered a third and fourth round had the lady not run out. It was probably for the best, anyhow; too much of a good thing, and all. We spent the rest of the evening back at the hostel, playing cards and chatting, preparing ourselves for heading home the next day. 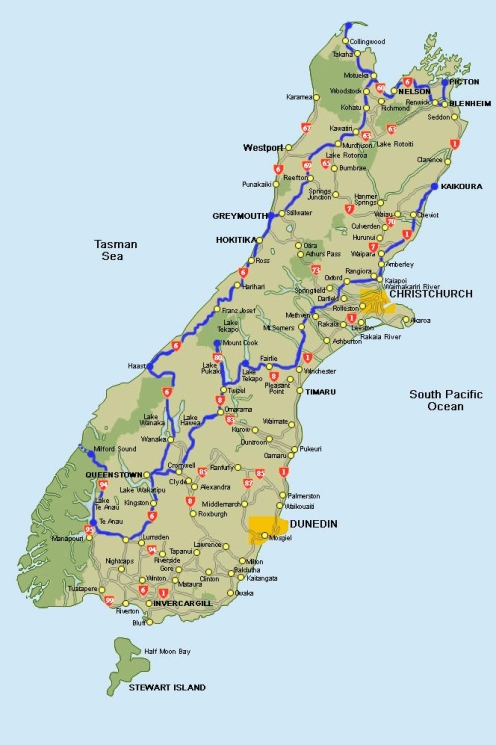