Sunday, April 15th we took Milford Road west to Milford Sound. Lonely Planet raves about this 2 hour drive, describing it as œa top road trip for sheer scenic wonder. That's no exaggeration. I can't describe how spectacular just that small glimpse of Fiordland is. Mile-high mountains, lofty cliffs, rivers and waterfalls cutting their way through dense rainforest, golden valleys , and it all feels so young and alive! It was like falling back through time to prehistoric Earth. We both remarked how small, how tiny we felt puttering our way through a land of giants. If I ever make it back to NZ, Fiordland will be number one on my list of places to further explore.

There are several spots along the road for tourists to stop and view the scenery. We stopped at a few, including ˜Mirror Lakes' where Greg snapped a couple photos of the mountain peaks reflected in the still water. At one stop up in the mountains we saw a kea, a species of parrot native to the forested and alpine regions of the South Island. The bird was about the size of a crow, drab brown with red under its wings. It was hopping around the roof of a car, posing for the group of people laughing and taking pictures. It was very curious and bold. It looked like it was thoroughly enjoying the attention. A sign at the car-park asking tourists not to feed the parrots called them œclowns of the mountains “ a perfect description!

Near to Milford Sound the mountains become so dizzyingly steep-sided that road-building must have been nearly impossible. In fact, the highway snakes up to a goliath wall so sheer that rather than attempt to climb over it, the industrious Kiwis simply bored a tunnel right through it. The Homer Tunnel runs 1270 m (4166 ft) right through the Homer Saddle. The walls are unlined granite. The tunnel is dark, long and damp. Driving through was awesome, but also very eerie – claustrophobics be warned.

In my opinion, the most dramatic part of Milford Road is the area just beyond the western portal of the Homer Tunnel. We had the amazing luck of traveling through on a clear day. We burst out of the darkness to dazzling sunshine and blue skies, a deep, lush valley far below us, and a wall of colossal mountains above and all around. My jaw dropped to the floor as I stared out the car's bug splattered windows in awe. It is an unimaginably beautiful scene. It left me speechless. Well, nearly “ all I could manage was œOh! Wow! WOW!! Poor Greg was driving, concentrating on the twists and turns of the road. I drove on the return trip so that he could get a good look around.

Greg and I had decided before heading out that morning that we would drive to Milford Sound but not be duped into taking an expensive boat tour. We arrived at the famous fiord around noon. We saw the great peaks, the clean water, and the gorgeous sunshine, and suddenly we found ourselves forking out the $80 each for boat tour tickets! It was well worth it. (*Greg: We were only going to be there once, and it is supposed to be one of the most beautiful places on this planet of ours, so why not?) We ate a delicious picnic lunch by the shore (mm, an entire wheel of Camembert cheese) and then boarded our ship. It was designed along the lines of a traditional trading scow. The ship's appearance did give a sense of romance and adventure to the voyage even though they kept the sails tied down. There was a cafÃ© inside with complimentary tea and coffee. Our guide had a million interesting facts and stories to share with us about Milford as we cruised along.

The first thing we encountered on our tour was a pod of dolphins. It was so exciting! There were at least ten of them, swimming together and apart, surfacing to breathe, basking in the beauty of their surroundings. They came right up to the sides of our tour boat. While they didn't seem to be as curious about us as we were of them, they showed no sign of timidity or fear. It was a fantastic experience. (*Greg: One forgets just how exciting it can be to see animals in their natural environment, especially with regards to dolphins. I'll admit that I was reduced to a single digit age as the dolphins appeared, and reacted accordingly I'm sure. I snapped several pictures, a couple of which I believe to be quite nice. Holly thought she had snagged some wonderful video. Thought — she had accidentally left the camcorder running while it hung around her neck. When she picked it up to record the pod of dolphins in all their glory, she in turn proceeded to unknowingly turn the camera off. This was discovered later in the evening, and she still has my sympathy.)

The tour boat took us along the shore beneath majestic Mitre Peak. Rising to 1692 metres (5551 ft) from the surface of the water, it is truly a stunning sight. No wonder it's one of the most photographed peaks in the country. Oh, and if you're wondering, it was named Mitre Peak by a survey crew who noticed it's resemblance to a bishop's mitre “ basically, a tall, pointy hat.

We sailed right out to the opening of the fiord and the rolling Tasman Sea. Huge seabirds, a variety of albatross, dipped and soared above the waves searching for fish. As we turned back into Milford our guide explained to us how the fiord's hidden opening prevented explorers from ˜discovering' the fiord until the late 19th century. Unless you get quite close, you'd pass by without ever suspecting Milford Sound was there. On the trip back down the fiord we stopped to see a few other sights of interest. We spotted a lone seal sunning herself on a pile of rocks. We also stopped to get up close and personal with Stirling Falls. 146 metres (505 ft) high, it is one of Milford's two permanent waterfalls. There are countless other falls tumbling down from the mountains, but they will all dry up after a (rare) few days without rain.

Our tour of Milford Sound took two and a half hours. We arrived back at the docks, cameras full, feeling fantastic. Nothing like the world's greatest scenery to inspire happiness! On the trip back down Milford Road to Te Anau we made two stops. œThe Chasm is a spot along the Cleddau River where the rushing current has carved amazing tunnels, spirals and basins out of the rock. Closer to Te Anau there's another stop at a river with a series of short, scenic waterfalls. The little river and the woods reminded me of the area around Morningstar Mill on the Niagara Escarpment. Greg took several great photos of the falls there. It was a fabulous day. We spent the evening back in the barn at Barnyard Backpackers, drinking a few Speight's and planning the next day's journey.

(*Greg: An interesting little tale, interesting only in hindsight however. Towards to end of the boat trip through Milford Sound I almost lost my camera. I almost lost my camera into the depths of Milford Sound. As we approached the docks, I was opening my camera case when suddenly my camera flew out, struck the deck, and skidded towards the side of the ship. Once it stopped, my camera was sitting on the very edge of the boat, mere inches from falling into the water below. Naturally, gasps were heard around us, and a NZ couple we had been talking to at points over the trip noted that I should buy a lanyard in order to secure my camera around my neck. The camera survived, and is quite fine. I sighed in relief, and realized the torture that would have been if I had lost my camera full of photos at the end of the boat tour. No lanyard has yet been bought.) 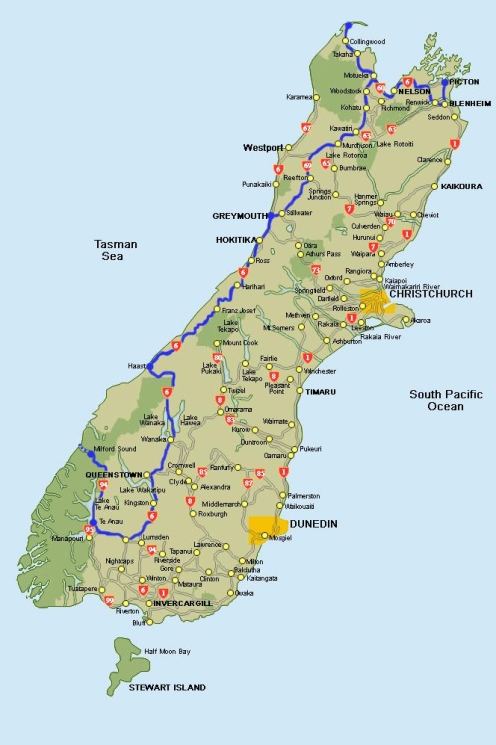