Thursday morning we had to push ourselves to get up and ready. We showered without shampoo “ foolish Greg forgot it back in Lake Tekapo. We had boring toast and stale muffins for breakfast. I don't know how people travel around, staying in backpackers for months on end. After two weeks on the road I really missed our private washroom and shower where I could leave my soap and toothbrush, and our own tiny kitchen exclusively for our use. I was looking forward to heading home. At the same time, things are always a bit gloomy when a holiday comes to an end.

Highway 1 north of Kaikoura is just as lovely as it is south of the city, winding along between the mountains and the sea. The beach is strewn with rocks, some rising out of the water like miniatures of the mountains on shore. The water is rough and foamy, crashing up against and between all of the rocks. There is one short stretch of coast marked on our map as a surfing beach, and lo' and behold there were surfers out there tumbling in the waves. It looked absolutely freezing to me.

Eventually the highway leaves the coast and runs up through the grassy foothills where sheep and cows graze. As we approached Blenheim and wine-country the land flattened out. We arrived back in Picton around noon, dropped off our little white rental car, checked our bags at the ferry terminal, and ate lunch while we waited to set sail. Incidentally, if you're ever in NZ you'll want to be aware that milkshakes are not the same as in Canada. They are thin “ basically just really frothy badly flavoured milk. What we call a milkshake the Kiwis call a œthickshake. Bear that in mind, lest ye make our same mistake.

We were on a different ferry, the Kaitaki, on the way back across Cook Straight. It was no less impressive. We stood outside on the deck as we sailed away from Picton and out of Marlborough Sounds. It is a really gorgeous area. The islands and long fingers of land that stretch out from the north of the South Island look like a jigsaw puzzle on a map. There are very pretty, undoubtedly very expensive cottages hidden throughout the area, and boats of every kind sailing and motoring over the sparkling water. Once we reached the open ocean the ship really began to roll. I felt very seasick. I had to go stand in the wind for awhile. We gave up playing cards “ all I could do was sit quietly in one of the reclining lounge chairs focusing on not being sick. Poor Greg must have been bored out of his mind. An announcement was made at one point that dolphins had been spotted off the port side but I felt too poorly to take notice. When we arrived in Wellington I was happy to put good, steady earth beneath my feet.

We took the free shuttle bus from the ferry to the railway station, which we discovered is also conveniently the bus station. We had a few hours before our bus departure so we stored our luggage at ˜Downtown Backpackers' (no lockers at the railway station “ bizarre!!) and walked in search of dinner. We ended up back at ˜The Feathers Public House', the same place we ate lunch at on our way south 10 days earlier. Dinner was fantastic. Greg had a burger. I had lamb shanks with mashed potatoes and roasted KÅ«mara. (A McPhee never passes up the opportunity for a hearty meal!) Oh, the poor wee lambs,.they are so delicious! We washed our food down with pints of Speight's Old Dark brew “ pretty tasty. (*Greg: Yes, I'm going to make a comment about the beer. The Speight's Old Dark brew was very nice, probably the best domestic beer I've had yet. I've tried several other varieties, but to be honest they've been nothing special. Any domestic beer I've seen thus far has been of the 4%-alcoholic-content variety, and I find it noticeable. To no surprise, considering I've been discussing the finer points of beer in New Zealand, several people have already made a point of mentioning to me that they've been told by friends and travelers alike not to go drinking with Canadians. It seems that we have quite the international reputation for… “having a good time”.)

Enormously full (for my part at least), we wandered about downtown in search of coffee. Everything closes up so early, though! NZ really does not have the same obsession with coffee that we do in Canada. Greg and I joke that if teaching doesn't work out we'll move back here and open the country's first Tim Horton's. We'd make a killing “ how could it not be a hit?! (*Greg: In general, the coffee in New Zealand is pretty disappointing. I'd take a cup of average-quality Tim Horton's coffee over anything I've had here. When informing classmates that at home I can get a large cup of coffee for just over $1, in Canadian funds at that, they seem envious. More so when I inform them that this coffee is better than most anything offered in NZ.) Finally we headed back to the railway station where we found a small coffee stand. We waited there till our bus arrived at 7:50 pm.

We were out of Wellington by 8 and back home in Palmy by 10. The bus ride home was much more fun than the ride south. We actually got to sit together. I passed out on Greg's shoulder after awhile, exhausted not just from the long day but also from our entire, amazing holiday.

Here we are now, back in Palmy. Fall is slowly creeping north; two weeks ago it was balmy here but already chilly on the South Island. Greg's busy back at school. I have 14 days left in New Zealand. That's difficult to take in. I spent how many years wishing and planning and dreaming of traveling to NZ? My four months here certainly have flown by! I'm excited to head home and see everyone. I can't wait till Steph's wedding! I'm eager to get back into work and possibly school this fall. But – OH, is it going to be tough leaving Greg behind. Six months! I've just finished remarking how quickly four months passed so I won't allow myself to worry too much about it. Besides, it'll be a busy half year for both of us.

New Zealand isn't quite the place I imagined, of course, but I haven't been disappointed by any aspect of my trip. Fingers crossed, someday I'll get back. There are more than a few places left to explore! 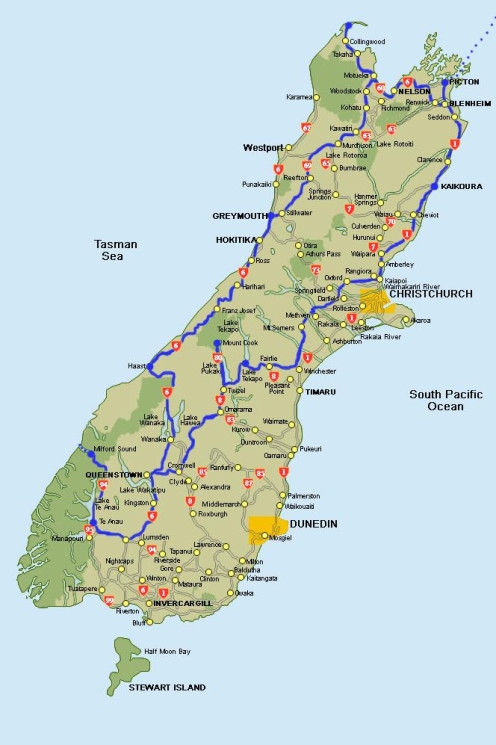