I woke up to rain, gale force wind,and the promise of blue sky peeking out of the clouds way off to the south. After I showered in the frigid outdoor shower house I phoned ˜Cape Farewell Horse Treks' to ask whether our trek was still a go. Yes! The weather was supposed to clear by 9. By the time we ate, packed, and were ready to leave the weather had changed so much for the better it was difficult to remember the rain.

Our horse trek was fantastic. We arrived just after nine, met our guide, chose our helmets, and were assigned our horses. My horse was ˜Flick', brown, 18 years old, and very bossy. Within 5 minutes of heading out, Flick and Greg's horse Monty were arguing with each other about who was to be in front. Anytime Monty and Greg would try to pass us Flick would cut them off. He eyeballed them the entire trek. Quite funny, I thought. (*Greg: Monty was brown, and over 25 years old. Holly and her horse were goading us for the entire trek.)

On the trek with us was just one other person, an older lady from Germany. She was an experienced rider, unlike Greg and me. I tried to direct Flick at times along the 3 hour outing as per the instructions of our guide but for the most part he ignored the pest on his back and did pretty much as he pleased. (*Greg: For whatever reason, Monty and I seemed to coexist quite well. I didn't seem to have much trouble guiding him around or getting him to alter his speed.)

For the first half hour we rode down a ˜metal' road. We'd call it a gravel road in Canada. (Kiwis pronounce metal: œmeat-el.) Eventually we turned off up a trail over very lovely green, sheep-dotted hills that led us to Wharariki Beach. The beach is breathtaking: massive rocks rose up from the surf like sinking ships, lines of foam traced the passage of the creeping tide, and warm golden sand sloped up into the grassy dunes. We rode way down to the far end and back. The German lady galloped around independently for a bit, enjoying herself immensely. (*Greg: At the far end of the beach we stopped to allow the horses and ourselves to empty any needy bladders. It is quite an interesting experience, being on top of a giant horse while it urinates. We were instructed to stand so as to alleviate the stress on the horse's kidneys, thus allowing them to relieve themselves both more comfortably and quickly. It seemed like I was standing up on Monty for a few minutes before the sounds of liquid striking sand ceased.)

By the time we turned around to head back my legs and bottom had begun to complain. Back at farm I could barely slide off poor Flick, I was so sore. (And there I was imagining myself a cowgirl like in ˜Lonesome Dove',I'd have died before the end of the first week!) It was a really fun morning, well worth the money spent. Oh, but Dave – I must regretfully inform you that the opportunity to yell out œForth Eorlingas!! did not arise. And I didn't bother asking Flick if he'd mind me attempting the fancy Legolas warg-attack mounting manoeuvre; he was a bossy horse, I seriously doubt he'd have been up for it. (*Greg: About ten minutes before the end of our trek, I was mildly excited as a result of not feeling any pain whatsoever. Whether my thought triggered some sort of subconscious switch I don't know, but shortly after my pain-free thoughts, I began to think fondly of life back on the ground. The pain was there, and I didn't like it one bit.)

We ate a quick lunch in the car before starting out for our next destination, Greymouth. It's a 6 hour drive from Cape Farewell down to Greymouth. We drove through some very pretty country, apple farms, rolling hills, towering tree-clad mountains with rushing, icy rivers, We had a lot of fun on the way but by the time we reached Greymouth on the West Coast it was past dark and we were more than ready to get out of the car.

We checked into our hostel, ˜Duke Backpackers'. Built as a hotel in 1873, it was recently renovated and upgraded. It's the second hostel I've stayed at garishly painted purple, green and orange. Duke's is a big old place with a bar downstairs, a huge kitchen, and old bathrooms with leaky faucets. It was comfortable, though, and seemed to fit the wet, rugged, west coast town. The South Island's West Coast is isolated from the rest of New Zealand by the Southern Alps. It has retained the atmosphere of the wild frontier with its small towns, empty highways and rough beauty. Greymouth is the region's largest town.

After unpacking, we drove to a take-away place and ordered greasy, hot, delicious fish and chips. Back at Duke's we considered going to the bar for a drink “ they have a ˜buy your first, get your second free' special “ but we opted for sleep instead. It had been a long day. (*Greg: Naturally, our stomachs were bigger than our eyes and we procured enough chips for a family meal. We ate and ate, and ended up bestowing what was left of the miraculous potato-pieces to an American couple that was just preparing their dinner as we finished ours. They were thrilled with our gift.) 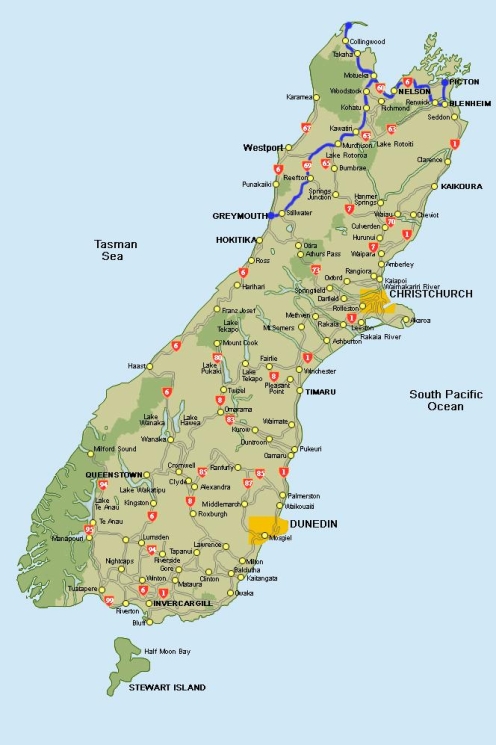