It wasn’t difficult waking up early in Picton. I was too excited about our trip to sleep any later than 7 am. Lucky thing, too: it's wise to get up early when staying in hostels if you don’t want to stand waiting for a frigid shower. We were both up and ready to go by 8. We were somewhat surprised when we walked out the front door to see the green mountains surrounding the little town – the only clue in the dark was a twinkling light high up that was too bright to be mistaken for a star. I really liked Picton. I’d love to spend more time there someday. It feels so cozy and protected, nestled down in the small valley. There's a Danish bakery right next door to the Villa. Despite having eaten a substantial breakfast, we both felt hungry enough to buy something. (* Greg: A substantial breakfast consisting of dry English muffins and a cup of tea. Substantial, indeed.) I had a sinfully delicious custard doughnut – Steph, I may not be fitting into my bridesmaid dress. From there we walked back down to the harbour. Our car rental agency was right beside the ferry terminal. Picton has a gorgeous waterfront, with all of the various boats anchored in the bay, the little town curving around the water, and the green mountains rising up behind.

We picked up our car, a white Toyota Corolla, without any trouble, and we were soon driving merrily down the highway through the South Island’s main wine district; Greg as navigator, Hollis at the helm. Our final destination for the day was Cape Farewell, way to the east, (almost) the most northerly tip of the island. For the first hour or so, through the small communities of Blenheim and Havelock, the road is mercifully flat and relatively straight. Very soon afterwards we hit mountains. Up, around, down, around, twisting, spiralling…sometimes I think we were heading backwards! It was slow going. The speed limit is 100 km/hr – I honestly don’t know how you could make it past 70. On most corners, you have to slow right down to 20, even 15, kms/hour. Add to this the fact that it's a two-lane highway, that there are trucks filled with sheep, cattle and logs whizzing around the corners, and that there are absolute maniacs passing,!!! I’m making it out to be more frightening than it was. We really had a lovely drive – despite the odd moment of terror.

The road descends from the mountains just before Nelson, a flat, touristy city on the northern shore. I’d read in Lonely Planet that it was a pleasant area, but neither Greg nor I were overly impressed. It was too busy there – just another city. I realize from traveling around NZ that the bigger the town, the less interesting I find it. Perhaps I’m being unfair. After all, we only stopped for a quick picnic lunch in a small downtown park and then whizzed on through. Imagine judging all of Niagara based on the view from the QEW? Or all of St. Catharines based on Ontario Street?! Anyhow, Greg took the wheel from there and we continued west until we reached the smaller town of Motueka. Past Motueka the road climbs up into another dizzying belt of mountains, possibly even curvier than the first. The climb up was alright but driving down the far side I began to feel pretty carsick. Thankfully the area beyond is very flat.

Driving along the flat plains around the community of Takaka, we could see rain looming over the mountains (always more mountains!) to the west. We made it to Collingwood, a tiny town on the north shore, before we felt the first drops of cold rain. In Collingwood there is a shop at the side of a pink house by the sea called the “Rosy Glow Chocolate House”. I read about it in Lonely Planet (LP was our Bible during the trip). We treated ourselves – yes, at my insistence – to absolutely heavenly handmade chocolates. There were so many choices it took me some time to decide. I would have bought several had Greg not been there to set a good example. (*Greg: From somebody who isn't a giant lover of all things chocolate, the chocolates we bought and consumed were absolutely amazing.)/

From Collingwood it was a short trip northwest to Cape Farewell. We found our place for the night, ˜Farewell Gardens Motor Lodge', without trouble. There's not much way up there. The friendly managers showed us to our caravan. A caravan, for those of you who haven't seen ˜Snatch', is a trailer. It was a really cozy, comfortable little spot. Just after dinner it began to rain again. We sat in our tiny caravan with the electric heater roaring, planning our trip route. The rain continued long after we'd gone to bed. In the middle of the night the storm woke me “ rain pounding on the tin roof above me and the wind howling. I can only imagine the size of the waves out on the beach. I love big storms and that one was pretty massive but I felt ill-disposed toward it – we had a horse trek booked for the next morning! I spent the rest of the night restless, lost in dark dreams involving canceled horse treks. 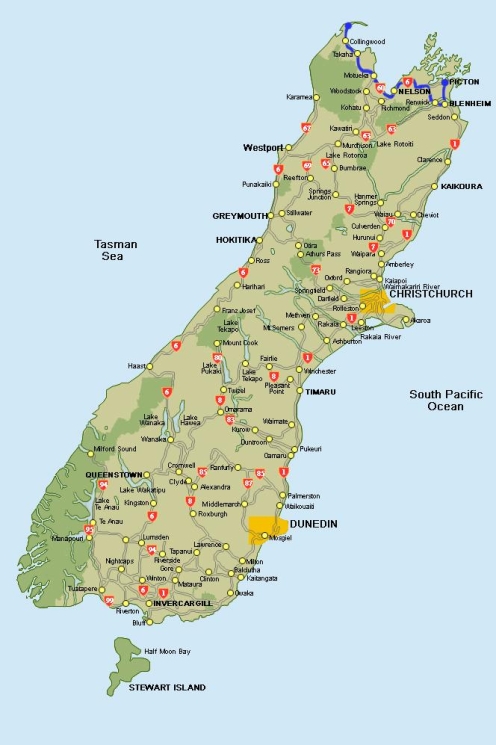